Home
Who We Are
News
Products
Product Archives
Downloads
About

In January 1980, FunkTronic was established as "Funk Tronik GmbH" in Schlüchtern/Germany by its founders Jürgen Möller and Lothar Hoffmann. Years of purposeful groundwork in the fields of electronics and telecommunication finally culminated in the formation of a successful corporation. Shortly thereafter, FunkTronic received the first significant order of Commander handsets with selective call input capability, laying the foundation for further advancements.

40 years FunkTronic, that is 40 years of secure products, 40 years of professional guidance and 40 years of solution-oriented customer service. Following our reputation as a reliable and independent manufacturer of electronic devices in the realm of radio and telecommunication equipment, industrial enterprises, public safety authorities and international organisations trust in our products and services.

Looking to the future, you can expect the same commitment towards you, our customers, that has constituted FunkTronic during the previous 40 years. In order to clearly transport that message at first sight, we have adapted our logo by using a new, more significant slogan:

In cooperation with Kenwood Deutschland GmbH, we developped the Desk Microphone KMC and Desk Microphone KMC2. These can be used with all Kenwood radios in a plug&play fashion via their front-side 8-pin microphone socket. The proper connection cable is already included.

The FunkTronic Desk Microphone KMC is a direct replacement for the Kenwood KMC-53W. The Desk Microphone KMC2 is a complete novelty. With its 16-button keypad it now allows you to control your Kenwood radio directly from your working desk.

For more information please have a look at our short manual.
(October 2019)

Have a look at our new information leaflets for Major BOS 4VD and Major BOS 8VD to get a fast overview of general features and available accessories. As a versatile radio communication platform our FT VOIP system is powerful, convenient and easy-to-use within a multitude of domains.

In order to simplify the configuration of our table-top consoles for typical fields of application and to allow for a seamless first contact with our system, we have prepared example configurations for Major BOS 4VD, Major BOS 8VD and FT638. An overview sheet of the IP parameters used in the configurations can serve as documentation of the system. You can find the respective documents in our download section. 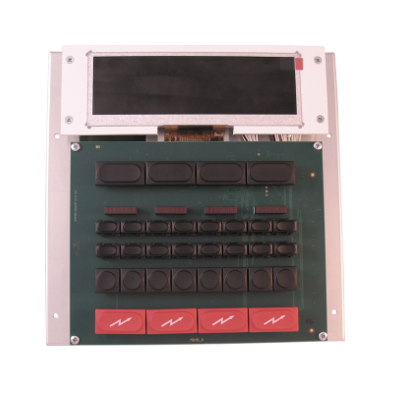 The radio control panels Major BOS 4VD and Major BOS 8VD are now also available as a version for facilitated desk integration. The keypad and the display board are placed above a bent metal plate, the main board is placed inside the cavity below. The metal plate contains fixing holes in order to mount the device underneath a desk.

Order information as well as a more detailed desciption/drawing can be found here.
(Januar 2019) 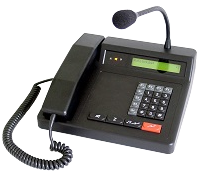 While the most remarkable difference on the outside is the new ethernet connector, the basic user functions will be still available, just as known from Major 4a/5a. Configuration will be simplified by the use of a self-explanatory web interface. The standard version of Major 4b/5b is able to control analogue and DMR radios (currently Motorola MOTOTRBO / Kenwood NEXEDGE).

Delivery of Major 4b/5b is scheduled for January 2019, while the full functionality for DMR radios will be available in February. Availability of the versions for direct VOIP connection is estimated for end of March.

Please find below the order information for the new versions:

FT-Nr. 681500 Major 4b
with handset and gooseneck microphone
for analogue and DMR radios

FT-Nr. 681510 Major 4b / VOIP
with handset and gooseneck microphone
for analogue and DMR radios
incl. option VOIP
for remote control of the radio via IP

FT-Nr. 714500 Major 5b
with gooseneck microphone
for analogue and DMR radios

FT-Nr. 714510 Major 5b / VOIP
with gooseneck microphone
for analogue and DMR radios
incl. option VOIP
for remote control of the radio via IP

Please don‘t hesitate to contact us in case further information is needed.

In cooperation with the Rheinisch-Bergischer Kreis we developped a crossborder solution that enables the communication of a control center that still uses analogous radios with personnel that is equipped with digital (TETRA) radios. Besides the mandatory bidirectional voice transition, a complete end-to-end status transition including acknowledgement is realized for the first time.

We are glad to announce that, after a short trial period, the FunkTronic Crossborder D/A is in live operation now, highlighting our experience in both - digital and analogous - radio control systems. Please find a more detailed description in the respective leaflet. If you are interested in a similar solution, don't hesitate to contact us.

Sandan CarManager is a 7" touch display, that ideally complements the functionality of our new table-top control panels Major BOS 4VD and Major BOS 8VD. Depending on its configuration the CarManager is able to provide a subset of the following features:

The Sandan CarManager was confirmed to operate via the PEI multiplexer of the FT638 digital radio box. Hence, it can be used in addition to our Major BOS 4VD/8VD consoles with the same TETRA radio. During introduction of the CarManager the connection of one or two TETRA radios (e.g. 1x talk group + 1x data group) will be possible with the standard version. Please contact us if you are interested in the Sandan CarManager.

With the Major BOS 4VD another voice-over-IP console with TFT display comes into play. With control elements for only up to 4 radios it is more ideally suited in many environments. Using our new FT638 as the counterpart on the radio site, the additional informations and functionalities of TETRA radios can be used and displayed directly on the console. In order to reduce the additional training effort of the users to a minimum level, the well-known user interface of the Major BOS 8a is retained. The new functions are realized via a self-explanatory menu structure.

The following features are planned:

Optionally, the Major BOS 4VD can have 8 connections, from which the dispatcher can freely choose those 4 terminals that fulfill the current mission requirements.
The use of legacy radios via direct PTT/SQL is also possible using the FT636B as the counterpart at the radio site.

With the Major BOS 8VD FunkTronic is developping a new voice-over-IP console with TFT display. Using our new FT638 as the counterpart on the radio site, the additional informations and functionalities of TETRA radios can be used and displayed directly on the console. In order to reduce the additional training effort of the users to a minimum level, the well-known user interface of the Major BOS 8a is retained. The new functions are realized via a self-explanatory menu structure.

The use of legacy radios via PTT/SQL is also possible using the FT636B as the counterpart at the radio site.

The table-top communication unit TKE-2 is a desktop microphone with a universal connection interface. Furthermore, it has a loudspeaker integrated in its pedestal and comes with one or two buttons. The main difference to our other desktop microphone is the possibility to connect several TKE-2 in parallel, because the microphone line is only connected to the respective output, when PTT is pressed.  －  Manual 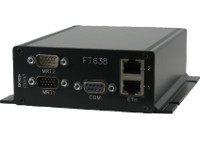 The digital radio box FT638 is a voice-over-IP (VoIP) interface for 2 TETRA radios, e.g. Motorola MTM800 FuG (ET) / MTM5000 series and Sepura SRG3900. In addition to voice transmission, the function set that can be realised via the Peripheral Equipment Interface (PEI) is also placed at the disposal of the VoIP participant. Examples are: display of caller ISSI, group selection, selection of operation mode (DMO/TMO...), transmission of status, SDS functions, time display of network server time.
An integrated PEI AT multiplexer enables the possibility to add an additional PEI AT participant per radio. Hence, the FT638 can be integrated into already existing systems, too. In addition to the standard version, an IN/OUT-version of FT638 is available. Here, up to 3 PEI AT participants can be connected to a single MRT, one of them also including voice connection.
Possible VoIP counterparts are Major BOS 1V, 4V and 8V, as well as Major BOS 8VD (ETA: Jan/2018) and Commander 6D (with rest ETH, under development).  －  Manual

The desktop microphone with universal interface is a unit supporting several applications (PA systems, radios, conference rooms, for example). It features a loudspeaker and provides one or two keys.  －  Manual

The interface Major BOSx Sepura SRG3900 can now be ordered with the option "soft key functions" (article no. 903060.F). In standard configuration, it enables the use of the soft key functions 4+5 via the Major's call buttons.  －  Manual-DE

In the past months FunkTronic GmbH contracted alliaces with both major manufacturers of TETRABOS two way radios. As a partner of Motorola respectively Sepura we can integrate new functionality at an early stage and achieve addtional benefit for our customers.

Future announcements on the "News" page will also be sent as a newsletter email. It will provide information about new products, new and updated manuals and fürther news. To receive this newsletter you need to register via the link Subscribe to Newsletter.
Unregister at the same place, if you do not like to receive the newsletter any longer.

The project FT638 TETRA Universal Interface is currently under development at FunkTronic GmbH. It will provide several options to connect control heads and accessories to TETRA two way radios. It will be available in the black box housing as well as module for 19" racks.

Because the product is still under development the naming, appearance, layout and functionality may change. Because of this the brochure may not reflect the actual state of the project.

The TETRA interface C5/6FuG8 (for Ascom oder Bosch) is available for Motorola's MTM800 FuG (ET) and Sepura's SRG3900 with firmware-Version 1.02. Details can be found in the Manual (German) and/or brochure (Sepura or Motorola).
The TETRA interface allows the handheld control head Commander 6 BOS (with restrictions also the Commander 5 BOS, option TETRA required for both) to connect to a analog radio FuG8b-1 and also to a Motorola MTM800 FuG (ET) or a Sepura SRG3900. The digital or analog radios can be used alternatively. The previous functionality of the analog mode is still in complete working order.

For the FunkTronic devices FT636B IP Interface und Major BOS V software updates are available.
The updates will be provided on request.

Commander 5 out of production

The distribution frame for RJ-45 is used for parallel connection of several Major BOS to one radio circuit. It is available in 2 different versions (7-fold or 2x3-fold)  －  Manual-DE

Major BOS 2b, 4 and 8 for Desk Integration (available)

The radio control panels Major BOS 2b, Major BOS 4a and Major BOS 8a are now also available as a version for facilitated desk integration. The keypad and the display board are placed above a metal bar, which contains fixing holes in order to mount the device from below to a table plate.  －  Manual-DE

The Commander 6 FMS and Commander 6 BOS received the BOS certification through the accredited laboratory of the Landesfeuerwehrschule Baden-Wurtemberg.
The Commander is compatible with the available rests (O, E, ED und K) and with the radio interfaces C5FuG8/9. The commander 6 supports every functionality the Commander 5 does. In addition it uses a coulor display for better representation and menu guided configuration.  －  Manual-DE C6 FMS  －  Manual-DE C6 BOS

The new FT636B IP Interface is now available.
In addition to the functionality of its ancestor (FT636) the following features have been (or will be) implemented:


The FT636B will also be available as a control center version for encoding/decoding FFSK/FMS telegrams, which can be controlled by an appropriate control center software.  －  Manual